This page is devoted to frequently asked questions (FAQ) related to shells.

What is the difference between thick and thin shells?

How are shell stresses calculated, and can these stresses be compared to the allowable stress of shell material?

Answer: Yes, the shell stresses obtained using SAP2000 may be compared directly to the allowable stress of the shell material, as this is the essence of Allowable Stress Design (ASD). Shell stresses may be reviewed in tabular format through Display > Show Tables > Analysis Results > Element Output > Area Output > Table: Element Stresses - Area Shells.

Stresses are calculated as the product of the stress-strain constitutive matrix and the strain vector obtained from joint displacements. The techniques and formulations involved are adopted from the following publications:

A comprehensive description can also be found in Dr. Wilson’s textbook:

How does the software apply stiffness modifiers to shell objects?

Answer: When stiffness modifiers are applied, the corresponding terms of the shell stiffness matrix are modified. This is comparable to modifying, for a given direction, the Young's Modulus or the shear moduli of the material. The structural stiffness matrix is then assembled, and global equilibrium equations are solved to generate deflections. These displacements and rotations then relate to strain fields which produce internal member forces and stresses.

How is a simply supported slab modeled using shell objects?

What are the practical limits on the maximum thickness of shell objects relative to shell dimension?

Thick-plate effects become significant when the deformation-span to thickness ratio is between approximately 20:1 and 10:1. The formulation itself is adequate for ratio down to 5:1 or 4:1.

Verification example 2-012 is attached. This example models a 0.1in x 0.1in shell object with 0.5in thickness. The solution obtained using SAP2000 matches that from the independent solution, validating the formulation and demonstrating the accuracy of shell behavior.

Please note that shell formulation is an approximate and special case of three-dimensional elasticity. Shell objects may be appropriate for some applications, while solid objects may be more suitable for others, such as with the assessment of localized behavior. Simple test problems may always be run to check the differences between modeling approaches.

How has my area object been meshed before any meshing is specified?

Extended Question: I have an area object with more than four vertices for which meshing is not specified. However, this object is meshed in the analysis model. How was this mesh created?

Answer: CSI Software uses a general meshing tool to mesh objects with more than four nodes when no auto-meshing has been assigned.

How are masonry shear walls modeled?

Answer: Masonry shear walls are modeled by defining the appropriate material properties or stiffness modifiers. A good resource for masonry properties is the NCMA TEK 14-1A publication.

Why can I not draw an area object between four points?

Answer: If the four points do not lie in a plane, an area object cannot be drawn because the profile is warped. Instead of using four-sided shells, these areas may be drawn using triangles.

How are shells merged with the sides of frame objects?

What is the difference between the load assignments Uniform (Shell) and Uniform to Frame (Shell)?

Answer: The difference between these two options is as follows:

How can I post-process the bridge-diaphragm area-object output to obtain meaningful design forces?

Answer: Diaphragm design forces may be obtained from the joint forces within the shell objects used to model the bridge diaphragms. Through post-processing, joint forces may be transformed into bridge response at the location of interest. Since this basically summarizes the process for generating section-cut forces, it may be more productive to obtain design forces through section cuts.

For unsymmetrical layering, how are membrane and plate behaviors coupled?

Extended Question: The CSI Analysis Reference Manual states that "unless the layering is fully symmetrical in the thickness direction, membrane and plate behavior will be coupled." If the element is defined such that planes remain plane in the thickness direction, then even for a symmetric definition of membrane layers, would not the layers contribute to the out-of-plane bending stiffness and demonstrate stresses with plate behavior?

Answer: This is correct that the membrane layers contribute to bending stiffness. The statement here concerns whether or not transverse loading generates membrane forces and deformation, and likewise, whether or not in-plane loading generates bending behavior. As stated, in-plane deflection will not produce plate bending when a layered shell is symmetric through its thickness.

This coupling effect could be demonstrated by applying a uniform temperature load to the shell object. For symmetrical layering, the temperature load will cause only in-plane deformations. For nonsymmetrical layering, out-of-plane deformations will be generated. As illustrated in the following Wikipedia article, this is similar to bimetallic strip behavior.

Extended Question: How is material orientation and S11, S22, and S12 orientation defined for shell objects? Are the 1, 2, and 3 directions the same as the local axes of the shell? A material angle of 90 degrees is used for longitudinal bar elements in the Nonlinear Shear Wall Watch & Learn video, then nonlinearity is defined in the S11 direction, which is the horizontal direction for the element. Is this correct that the software rotates the local axis, for that layer, by 90 degrees relative to the element local axis? Would it have the same effect to have the material at zero degrees, but define the nonlinearity in the S22 direction? On the other hand, if the angle simply refers to material orientation, should not the nonlinearity be defined in the S22 direction, which is the nonlinear direction?

For such uniaxial materials as rebar, where behavior is only defined in the material 1 direction, a 90° material angle with nonlinearity along S11 must be specified. For fiber-wrapped composites, it may be best to specify material behavior along another angle, perhaps at 45° from the member local axes.

Please note that while material properties are specified in material coordinates, loading and output forces and stresses will always be input and reported in terms of member local axes. 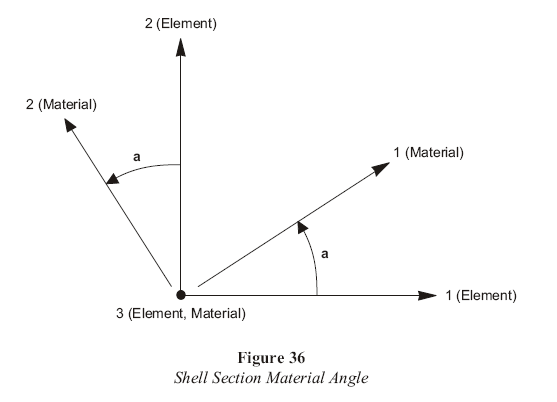 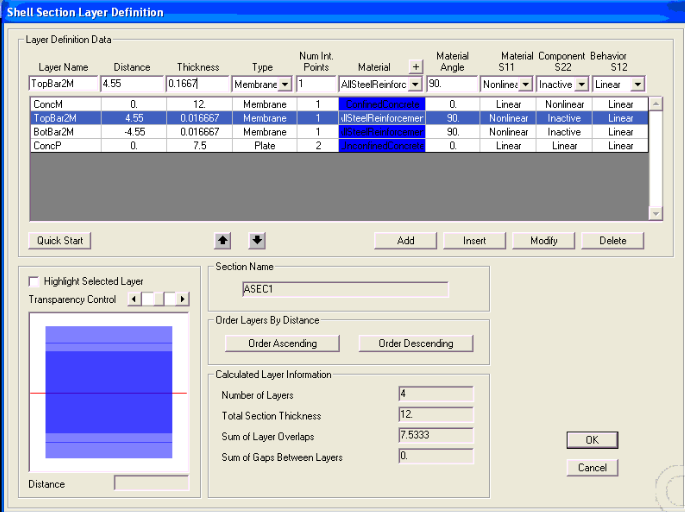