The multi-pendulum model described on this page is primarily an academic exercise, not a typical structural problem, to illustrate that SAP2000 is capable of handling large displacements in time history analysis.

As shown in Figures 1 and 2 below, a Newton's cradle pendulum system is modeled using frame objects and gap (compression-only) links, located at the points of contact. Attached is an animation of the system oscillating.

The time of impact is extremely short compared to the period of oscillation of the pendulum. The propagation of the momentum between the essentially rigid balls (gaps) is a high-speed wave propagation problem, not a typical structural problem. Typically wave-propagation problems are solved using explicit direct-integration methods that are unstable except at very small time steps. This requires some special consideration when choosing the time integration method:

Detailed description of the model including the parameters for the time integration method are provided in the attached "analysis notes.pdf" file. 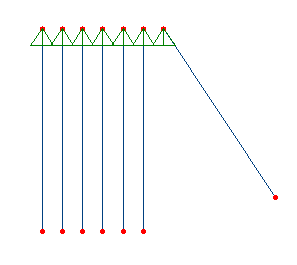 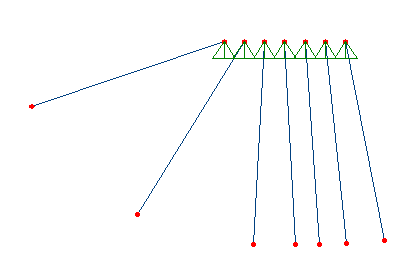 Pendulum systems may be modeled in SAP2000 using nonlinear time-history analysis with large deflections. Typically, the restoring force comes from a linear spring modeled either as a torsional spring at the support or as a horizontal spring attached to the free end. Pendulum systems may be useful for simulation and solution of isolation and tuned-mass damper problems.