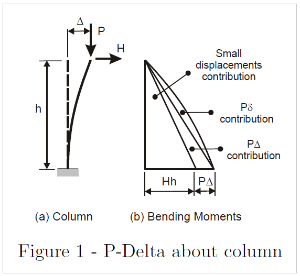 P-Delta effect, one type of geometric nonlinearity, involves the equilibrium compatibility relationships of a structural system loaded about its deflected configuration. Of particular concern is the application of gravity load on laterally displaced multi-story building structures. This condition magnifies story drift and certain mechanical behaviors while reducing deformation capacity.

P-Delta effect typically involves large external forces upon relatively small displacements. If deformations become sufficiently large as to break from linear compatibility relationships, then Large-Displacement and/or Large-Deformation analyses may become necessary. The two sources of P-Delta effect are illustrated in Figure 1, and described as follows:

P-δ effect, or P-"small-delta", is associated with local deformation relative to the element chord between end nodes. Small P-delta effects can affect overall structural behavior by slightly reducing the buckling load, and can change the moment within the member.

Typically, P-δ only becomes significant at larger displacement values or in especially slender columns. (Powell 2006). Small P-delta effect is important for local buckling and for design algorithms that expect member buckling to be accounted for by analysis. This includes the AISC direct-analysis method.

Small P-delta is automatically included in frame elements to the extent that the deflected shape can be well represented by a cubic curve.  The frame small P-delta effect is very accurate for a single element with effective-length factor of 2 (cantilever), and it is moderately accurate for an effective-length factor of 1 (pinned or sway condition).  When accurate small P-delta effects are important for analysis or design of a member, it is generally recommended to auto-mesh frame objects into 2 or more elements, especially for axial loads close to buckling.  For most other purposes, small P-delta effects as they impact the overall structure are adequately considered with a single frame object between connections.

P-Δ effect, or P-"big-delta", is associated with displacements of the member ends. Large P-delta effect is important for overall structure behavior under significant axial load.  As indicated intuitively by Figure 2, gravity loading will influence structural response under significant lateral displacement.

P-Δ may contribute to loss of lateral resistance, ratcheting of residual deformations, and dynamic instability (Deierlein et al. 2010). As shown in Figure 3, effective lateral stiffness decreases, reducing strength capacity in all phases of the force-deformation relationship (PEER/ATC 2010). To consider P-Δ effect directly, gravity load should be present during nonlinear analysis. Application will cause minimal increase to computational time and will remain accurate for drift levels up to 10% (Powell 2006).

Note that P-delta effects increase lateral flexibility for members under compression, but they can also increase the lateral stiffness for members under tension. In some systems the two effects can cancel out, at least for overall system behavior. For example, lateral wind loading on a building already under gravity load may increase the compression on one side of the structure and decrease it on the other side, perhaps even going into tension. Locally, the members under greater compression are more likely to buckle than the members on the windward side, and small P-delta effects could be important. However, the lateral stiffness of the overall building is little changed by the presence of the wind load as the increased flexibility of columns on one side is counteracted by the smaller effect (or even tension stiffening) on the other side.