For nonlinear static, and nonlinear direct-integration time-history analyses, users may simulate post-yield behavior by assigning concentrated plastic hinges to frame and tendon objects. Elastic behavior occurs over member length, then deformation beyond the elastic limit occurs entirely within hinges, which are modeled in discrete locations. 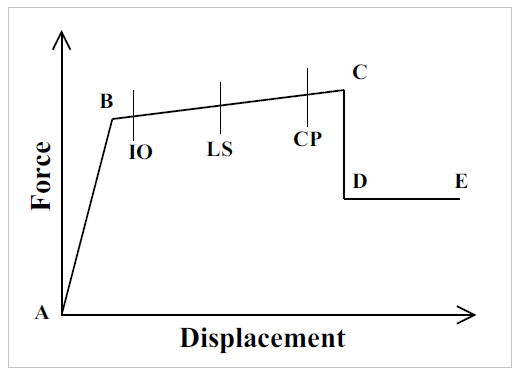 Inelastic behavior is obtained through integration of the plastic strain and plastic curvature which occurs within a user-defined hinge length, typically on the order of member depth (FEMA-356). To capture plasticity distributed along member length, a series of hinges may be modeled. Multiple hinges may also coincide at the same location.

Plasticity may be associated with force-displacement behaviors (axial and shear) or moment-rotation (torsion and bending). Hinges may be assigned (uncoupled) to any of the six DOF. Post-yield behavior is described by the general backbone relationship shown to the right. The modeling of strength loss is discouraged, to mitigate load redistribution (which may lead to progressive collapse) and to ensure numerical convergence.

CSI Software automatically limits negative slope to 10% of elastic stiffness, though overwrite options are available. For informational purposes, additional limit states (IO, LS, CP) may be specified which are reported in analysis, but do not affect results. Unloading from the point of plastic deformation follows the slope of initial stiffness.

Both P-M2-M3 hinges and fiber hinges are available to capture coupled axial and biaxial-bending behavior. The P-M2-M3 hinge is best suited for nonlinear static pushover, whereas the fiber hinge is best for hysteretic dynamics. Additional information on hinges can be found in the CSI Analysis Reference Manual (Frame Hinge Properties, page 131).