Lanes are available through the bridge modeler to indicate where vehicle loads act on a bridge superstructure. Lanes are defined by reference lines, which may be layout lines or frame-object paths. Versatile features enable the modeling of complex roadways and traffic patterns. Multiple lanes may be created, straight or curved, each of a specific length and width, and need not be parallel. Users may combine vehicle loads with static and dynamic loads, then envelope parameters for maximum and minimum response. Response quantities may then be presented in a useful manner according to lane geometry.

Vehicle live loads may be created manually or selected from a list of standard specifications. Moving-load analysis may then be selected as the load case which implements one of the following methods: 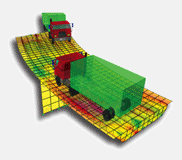